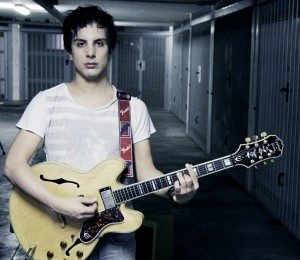 Miguel is a musician, guitarist and composer born in Santiago de Chile. He started his professional career in 2013 founding the indie rock band Andes Empire in Rome. A single off their first album ‘Reverse’ recorded by RBL Music, won the Redbull Music Contest and took the band to Milan and Sardinia to headline concerts for more than 15.000 people.

Miguel has continued working on his soloist instrumental rock albums “Inspirations.” Miguel is now recognised all over the world thanks to the success of his albums and especially because of a series of street performances done in various European capitals. Videos taken by fans of these virtuoso performances have become viral hits, racking up millions of views.

Hear him on the following link, and watch him for real at Beale Park this year – we can’t wait:
http://www.miguelmontalban.com/photos-videos