Dottie About Cake – Vintage Tea Tent at the boat show 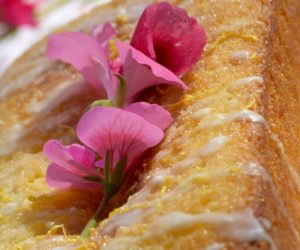 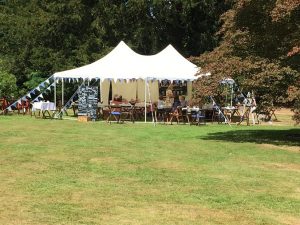 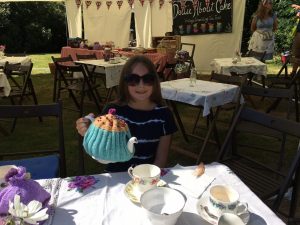 Owner Helena says:  “We are a small social enterprise encouraging and supporting people back to work.  We also employ those who are fundraising for World Challenge projects and community projects which benefit others less fortunate than ourselves.

Our fabulous bakers will be busy in the kitchen making you the very best Victoria Sandwich with homemade strawberry jam, a lovely coffee and walnut cake with coffee frosting, a delicious lemon drizzle, fabulous scones with clotted cream and jam and much, much more.

We will be catering for our gluten free, wheat free and vegan boat show friends also. So step back in time in our vintage tea tent and enjoy a good British cuppa served on our best china.  We look forward to inviting you to tea…”

Fun for all the family! 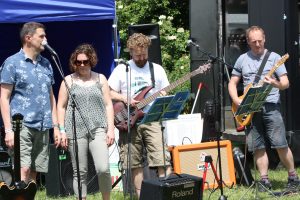 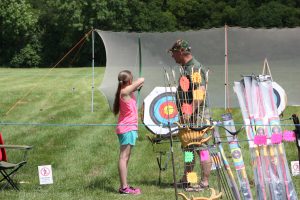 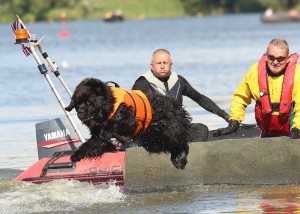 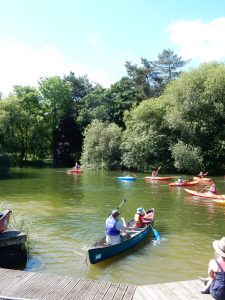 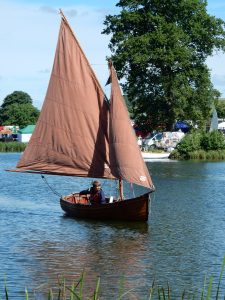 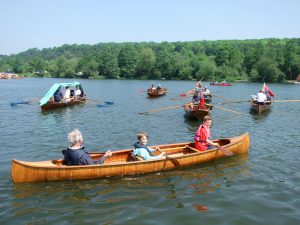 Canoeing, archery, Newfoundland Dog displays, sailing, SUP boarding, live music, hover crafting: why not camp over? There is so much to do!

The Classic Motor Boat Association is the largest organisation in the UK catering for the preservation and enjoyment of classic powerboats and engines from British and Overseas manufacturers. It was founded in 1998. The CMBA is run by enthusiasts, with a volunteer committee and is dedicated to raising awareness of classic motor boats and the enjoyment of classic boats. They will once again be displaying some fabulous boats at the show.

A very special military canoe on the lake this year! 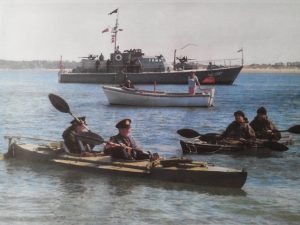 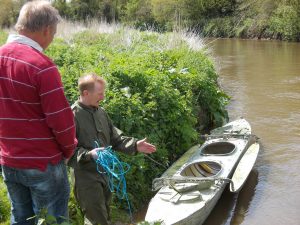 This military canoe was made by an aircraft factory in early 1945. Number 103 of 200 of this type built for Combined Operations Commando forces. It was sent to the far east and eventually was used against the Japanese in Borneo. It still has some damage from these excursions. We have kept these dents as they are part of its history; its issued CQR anchor damage, and stern deck boot dents.

Restored to wartime and seaworthy condition, it is one of only 8 or 9 left in the world of which this and one or two others are seaworthy. This one is even rarer as all its tiny deck fittings and seating are intact. Operationally fitted with a machine gun mount and an outboard engine mount, it comes apart in seconds, for middle, bow, stern and outriggers. Made of an aluminium alloy, all sections are original and all serial numbers of each part match so it really is a complete canoe. We even have its original sail and spars, though it is a little damaged. We have its original spare wooden rudder, but the rudder and yoke fitted have been made from original patterns, as have the paddles.

It came back to England in the mid-1970s in a shipping container full of kit from a returning University expedition to Borneo and spent the next 35 years or more on a private lake, to hunt ducks and fish from.

Before the last owner painted it with m.o.d. tank paint (which helped it survive all these years in the open). On its bow was painted the name Argo, in the style that was common by those who used these for when they raced each other in training, to encourage their handling skills. 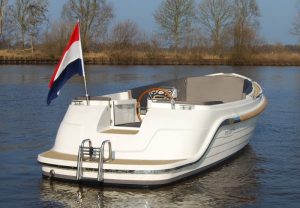 The Interboat Intender 650 will be on display this year! It offers modern lines redesigns its predecessor the 640 by expanding seating available and providing a door in the transom. The new design is also now certified for 9 passengers and is RCD Cat C.

Her integral moulded bathing platform and door to the cockpit allows easy access to the water. There are many engine options from 16hp to 75hp which means this model is perfect for all types of cruising. This new design is very comfortable offering huge amounts of space and a comprehensive standard specification.

This 21 foot Intender has enormous amounts of space for seating and storage. There is an anchor locker on the fore deck at the bow of the boat. Directly behind that is the sizeable cockpit. The fore of the cockpit can easily seat up to six people in comfort. Amidships is the engine box that also doubles as a useful table. At the stern of the cockpit is seating surrounding the helm of the boat that can seat up to four in comfort.

The boat is very versatile and can be used to sleep on if you decide to go for the sundeck option. For cruising in sports style yet also in comfort, this vessel will not disappoint. http://www.valwyattmarine.co.uk/contact/ 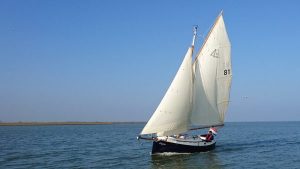 “Cape Cutter Marine is excited to be to be exhibiting for the first time at the Beale Park Boat and Outdoor show this year. We will be exhibiting the Cape Cutter 19, a 19 foot gaff cutter trailer sailer.  The show boat will be packed with extras and options and will be for sale at a special show price”. Please see our website for further information.
Your Sailing Adventure Starts Here!” www.capecutter19.com 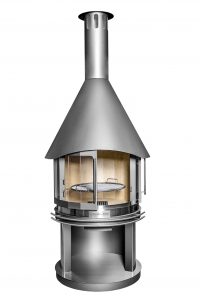 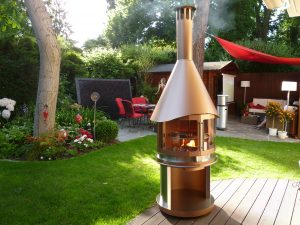 German manufactured stainless steel fire grills will be seen in the UK for the first time on 1-3 June at the Beale Park Boat & Outdoor Show. The outstanding quality multi purpose bbq, pizza oven and patio heater in one stunning design adds a new dimension to the world of outdoor cooking and entertaining.

Phoenix Grills, founded by Martyn Willcox and Rebecca Hannam, was launched based on the conviction that these grills will become synonymous with the escapism lifestyle we all strive to achieve in our gardens.  The grills are functional yet beautiful; they will add warmth and elegance to garden entertaining space and allow parties to continue long into a cooling English evening.

Meet some of the finest boat builders in the land 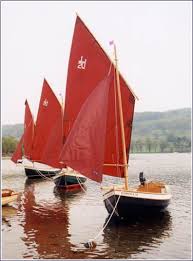 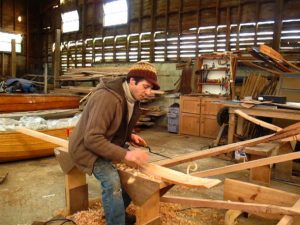 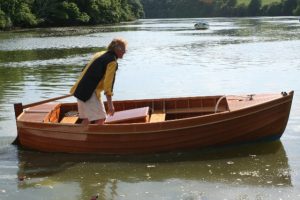 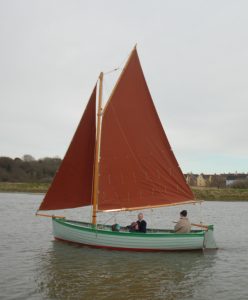 The joy of canoes! 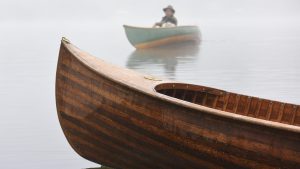 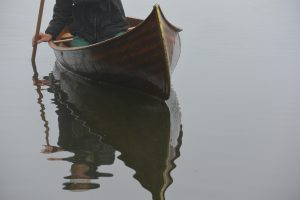 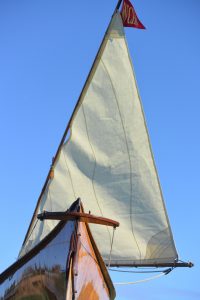 Whatever your interest, take the time to pop by our stand and have a look at some of the canoes on display, we will have a selection of canoes, old, older and really old!  Cedar canvas canoes, wood strip and rib canoes will be there to look at on and off the water. Some are 100 years + and still in use. Chestnut, Lakefield, Peterborough and more.

If you have a canoe and wish to discuss repair or restoration and need some helpful tips or information just ask any of our members.

See you at The Beale Park Boat and Outdoor Show- You know it makes sense!

Anyone for a ride? 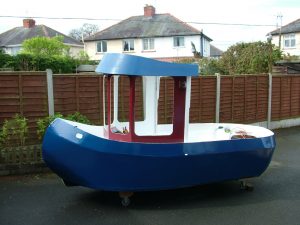 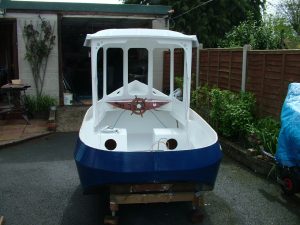 Nearly ready for the lake! Free rides all weekend on this charming little Tug boat – fabulous!